And at last! We reach the end!

The Raven King is very interesting. Plus, PLOT TWIST. Spoilers ahead! Proceed with caution.

The Good: I’m reeling. I still can’t decide whether the plot twist to do with Glendower is good or bad. SPOILERS: I suppose if Glendower was still alive, it would have made for an interesting situation—he’d be all dazed and confused and everything, and maybe even more havoc would ensue. Still, I was a little disappointed. On the other hand, I LOVED the theme of sacrifice. That was maybe my favorite theme of the whole book.

‘You will live because of Glendower. Someone else on the ley line is dying when they should not, and so you will live when you should not.'”

Highly intriguing, and, SPOILERS, especially revealing how the sacrificial victim turned out to be Noah, long ago. It was hard to miss him when he was gone, though. He had such a wispy, almost-gone existence that it felt like he wasn’t even there at all.

And then how Gansey sacrificed. I loved that. The fact that he knew what he had to do and did it, even when he didn’t want to. That’s an important truth all of us should learn, and he did the right thing. That was the central theme. I also loved how his death was foretold; how he knew he would die added an element of suspense that wouldn’t otherwise have been there. It made his sacrifice more meaningful because it was anticipated. I could go on and on, but for time’s sake i’ll end the good here.

The Bad: The things I were most uncomfortable with was the cussing, and, consummated in the Raven King, a certain…relationship. I hate it when the lines are blurred on the homosexuality issue, and that was my least favorite part of the whole series. (And Ronan belongs with ME!) Thankfully, the issue was pretty quiet until the last book, but then…*sigh*. I just skipped that part. One thing I did appreciate about the entire series, though, was that nothing explicit was ever even suggested between characters. Stiefvater artfully steered the book away from messes like that.

Aside from that relationship, I 100% recommend the Raven Cycle. If you read it for nothing else then to enjoy and take notes on the beautiful writing, just #doit. The writing style is wonderful. The characters are rich in backstory and reality. The fictional world is captivating and intriguing. The plot is perfect. The mythology is flawlessly woven into the story, adding a mysterious and mystical element. I love books that suck me into another world, and this series does exactly that. In addition, the issues of morality and sacrifice are thought-provoking to read.

After all, not just any series moves me enough to go on and write an entire series of reviews on it. I’ve never actually done this before for any book. So go, flee to your library, and immerse yourself in the Raven world. 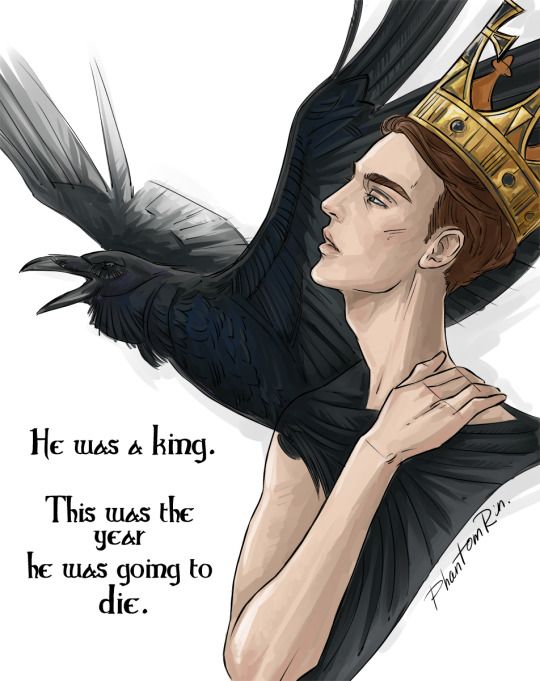 Published by thoughts of a wanderer

There are some thoughts that a person (maybe a wanderer, idk :PP) has that her friends just don't understand. So I made a blog, and will instead make YOU suffer with putting up with all of my musings on life that are too deep for the average human. View all posts by thoughts of a wanderer

Recent Posts: thoughts of a wanderer

Two years ago, I got obsessed with Princess Mononoke. I can’t remember how; maybe I saw some stills from the film on Pinterest or Instagram. The moment I laid eyes on Ashitaka and San, I was hooked. I needed to see the movie.  In February 2019, I watched the movie (English dub) with my best […]

four tips from my writing process!

Blogs I’m Reading (and you should too)

This blog is a Christian perspective on the Old Testament and Current Events from Dr. Claude Mariottini, Professor of Old Testament at Northern Baptist Seminary.

A life project of vulnerability in an attempt to capture the beauty of imperfectly following the Lord.

all those years that i've lived, i have never found it easy to articulate my thoughts — not even ink or paper could ever help to transmit them. in here, i will attempt to do so.

Living and Writing for God’s Purpose

All about Star Wars, check my website for updated information about the greatest SciFi saga of all time.

The Branches Of Jesus

1 Tim. 4:12 Do not let anyone look down on your youth but set an example for the believers in spirit, purity, conduct, and speech.

She writes. Sometimes. Mostly she gets distracted